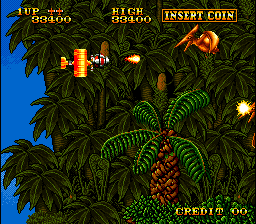 Ships are disappearing in the Bermuda Triangle. Two planes are sent to an unexplored island, the so named "Hell Island", to investigate the disappearances. They discover an land forgotten by time, filled with hundreds of hostile dinosaurs.

The player's plane in PREHISTORIC ISLE only has a single, straight ahead shot. By picking up a power-up icon from floating dinosaur eggs, however, the ship gains an option. The option rotates around the ship when the secondary button is pressed, and unleashes different attacks based on its positioning: straight ahead powers up the primary weapon, at an angle above fires reflecting orbs, at an angle below drops bombs, straight above or below fires a reflecting wave, and straight behind drops floating bombs. The option and the ship's speed can both be upgraded from icons dropped by dino eggs. Enemies come from all sides of the screen, and the screen will occasionally scroll up and down as well as forward.

Reviewer: rLikman - favoritefavoritefavoritefavoritefavorite - April 30, 2020
Subject: Fun times!!
This was such a great game when it came out. I remember the frenetic rotating of the extra gun to save the plane from enemies and to get the correct type of weapon to kill them. If it's still so in this version that you benefit from only upgrading to the second to last level to be able to do the last upgrade when the extra gun is close to breaking and repairing it I don't know.

One thing that I don't understand though is why it's the left alt that is button number two by default. I don't know how many times I've opened the meny when I've double pressed the buttons. And yes, tab to change the key binds.